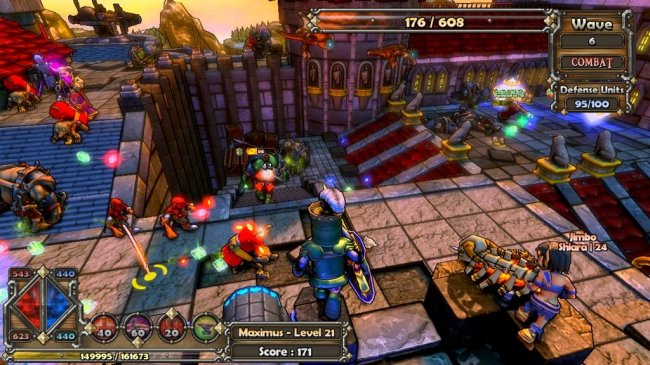 Dungeon Defenders is a Tower Defence style game which sees you protecting the Eternia Crystal.

Dungeon Defenders is a game I played last year over the Christmas holidays with my brother. I put tons of hours into the game (54 hours according to Steam), it’s quite addictive however after playing multiplayer so much Singleplayer doesn’t interest me. If you have friends or love action and tower defence games read on.

Dungeon Defenders requires the player to choose from different classes, I chose the Squire(knight) for my first playthrough, whilst my brother chose the Apprentice(mage). This meant that the Squire could do the close combat whilst the Apprentice could do range attacks on the whole groups of monsters. Also in dungeon defenders is the tower defence twist and so you are not just on foot, you can also create towers (similar to in sanctum). These towers can be upgraded to increase their firepower, range and health.

Your characters can also be upgraded with your towers and abilities.

I personally found myself using the Squires Slice N’ Dice blockade, and the harpoon quite frequently once I had unlocked them. Your character can also have pets which occasionally will attack enemies some of which can do a great deal of damage. The gameplay feels remarkably polished and some of the level design apart from a few levels, feels quite unique with some hidden ways of being transported around the map occasionally appearing so that the game is manageable on singleplayer. However singleplayer still didn’t get my attention as much, nor did I have as much fun. That said most games feel better when playing with a friend, even the worst of games. The story in the game is quite weak, however it doesn’t really feel needed for this type of game. There is tons of content in the game with most of the 54 hours being spent just on my first character. Whilst after changing characters I could have put in more hours. Although if you do feel short on content there is DLC available such as new classes and maps albeit too much DLC, but I doubt you’ll need the DLC as there’s tons of content and I didn’t find the DLC maps as compelling although the new classes were interesting.

In conclusion Dungeon Defenders is a great game which you should definitely pick up, and its only £10. For those wanting the full experience I recommend you buying the four pack between friends for £30, or alternatively waiting until the next Steam Sale.

Hey I'm Tom and I'm 24 years old and from the United Kingdom. I currently work as a software developer and I'm also Games Computing graduate, and have a heavy interest in becoming a games developer or a games reviewer. So far I have developed several game prototypes and a one button game for an assessment. I've also published a game on Android called RunTapper and also one called color dome. View all posts by TomInbound