So I ended the exam season, and bought Mario Kart 8 to celebrate. Which under the current Mario Kart 8 promotion allowed me to receive a download copy of Pikmin 3 for free. If you don’t know about this game promotion you can read about it here. Anyway into the Review..

The controls of Mario Kart 8 are still particularly tight in drifting, I did not opt to use motion controls as I did on Mario Kart Wii as the gamepad controls perfectly and there is no option for automatic steering for motion control as there was on the Wii Version, of which I was used to. The Gamepad offers off-screen play, a map, and a horn to choose from as widgets. Apart from off-tv play these additions are welcome although not particularly useful as the map is a distraction from the TV(I only used it to check friends positions after finishing a race or in a safe section such as being fired out of a cannon, as it can easily cause you to crash) and the horn can be easily activated without the gamepad by using the item button without an item in hand.

Mario Kart 8’s graphics are particularly gorgeous, and the game runs at 60fps in single player and 2 player, whilst 3-4 player is 30fps. The lighting and weather effects look gorgeous in HD and Nintendo has done great job in giving great audio to accompany the graphical fidelity. There are lots of small details which become noticeable such as drift marks being left on the maps, and the flame effects from boosting, which become more evident in highlight reels.

Toads Turnpike pictured above, originally on the N64.

The tracks in Mario Kart 8 are this entries particular selling point, the addition of anti gravity allows many of the courses to become even more inventive for example Shy Guy Falls allows you to drive up and scale a mountain, and then drive directly down a waterfall, and glide back round to the start. Even the retro courses contain small amounts of anti-gravity. This brings life to many of the Retro courses for example GBA Mario Circuit and SNES Donut Plains 3 are now more interesting to look at and drive on due to the increased variation in the tracks, this is clearer if you have played Mario Kart 8 and any of the particularly older SNES and GBA courses which felt particularly flat.

Kart Customization works the same as it did in Mario Kart 7 allowing you to customize your karts wheels, body, and glider. This then effects the different stats of your vehicle, your chosen characters weight also affects the stats of your vehicle for example larger characters have higher top speeds whilst lighter characters have faster acceleration. The Customization works well and allows you to try different combinations to find out which one suits you best. Unlocks for the customization occur from collecting coins after races, when you hit certain brackets you unlock a random piece for customization, these finishing at 2800. However it became frustrating to me knowing that after the last normal unlock at 2800 there is still one more coin unlock at 10,000 coins however you stop receiving notifications of how many coins you are getting at 2800 and there is no way to view your coin total meaning you have no idea how close you are to that 10,000 coin golden glider.

The character roster has been subject to large argument, I welcomed the addition of the Koopa Kids although many fan favourites such as Diddy Kong, Birdo, Koopa, Dry Bones and unfortunately for me, Bowser Jr. This is fine as long as the spaces these characters once occupied were filled with creative or staple characters in the Mario Universe, right? Unfortunately the addition of extra baby characters and Pink Gold Peach plague the character roster in this installment. I would have liked to have seen ROB, E.Gadd and more less known Mario Kart players rather than made up ones that haven’t been part of a series.

All the new items in Mario Kart 8 are welcome and I hope they return in future installments, the Piranha Plant gives speed boosts every time it bites and also attacks players for a period of time, it pulls the kart forward much like the Chain Chomp from Mario Kart Double Dash however giving you more control in your turning. There is also the Boomerang Flower which can be thrown forward 3 times, and even curves with the tracks at times, this acts as a fast more accurate green shell, which can hit people on the way back as well. The Super Horn allows players to have a radius attack, which destroys shells (including the blue shell) and can even be collected in first. All of the items have been balanced and particularly online it feels like the most balanced Mario Kart game yet.

On the other hand the Battle Mode is one of Mario Kart’s less important modes however those that enjoyed battle mode in previous installments may be disappointed to hear that the Battle mode now takes place on full race tracks, rather than a confined frantic battle it allows for more slow paced action, I have even seen people hiding behind rocks and even traffic online which can be interesting although sometimes you can go minutes without even seeing anyone. Therefore the new battle mode is up to personal preference, I like that that I am not constantly bombarded by items however it is disappointing that so little changes were made to the tracks even putting barriers up just to reduce the alternative paths people can take would have been nice as there are courses with forks in the routes meaning you hardly ever bump into people. 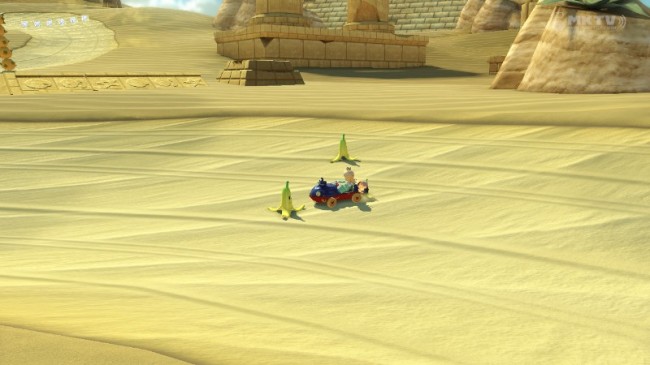 The Offline Ai is for the most part good and the Ai seizes opportunities for slip stream and even do tricks and take shortcuts when available and they have the correct items.The Ai is also successful in utilizing the anti-gravity sections.  I had no problems with the Ai until I got to Mirror Mode and 150cc where the Ai would be slow allowing you to get a large lead in the race, however their aim appears to be too good as the Ai appears to always be looking behind and in front of it, there have been times where I have jumped off a wall whilst not in sight of the Ai and it has been able to throw a shell out where I would land back on the course. Whilst I do want a difficult 150cc and Mirror Mode I would prefer a faster set of Ai than corner sharper to encourage risky moves and slipstreaming , rather than what at times seems to be their unfair and very accurate aim.

Mario Kart 8 is the first installment that allows you to edit and upload your highlights to Miiverse and Youtube. The Miiverse community is currently very active for MarioKart answering questions and posting opinions. Although the Highlights don’t allow you to cut the video and as you are only allowed to upload a 60second max clip, this sometimes means that the categories such as “action” and “drifting” do not capture that particular moment you wanted. It is lucky that the Luigi Death Stare was captured in the Highlight.

Online play is great and allows helps to make up for the sometimes unfair Ai in offline play. The online gives you points based on your wins in race and battle mode. You can also join tournaments and set custom rules and it is great to see that their are many recognizable communities in the tournaments section. There is also a chat function in the public lobbies although these are set words, however in private friend lobbies you can use voice chat in the lobbies yet not in game. The only problem I had with the online was that occasionally I would get randomly disconnected with a connection error, that with research online appears to not be the fault of my internet but rather with Nintendo’s online services.

Overall Mario Kart 8 is a great game, with a active miiverse community sharing highlights, ghost data and screenshots. The graphics, audio and tracks are all beautifully crafted and it is sure to be one of your favourite games this year. Whilst the game disappoints in a few areas which I have noted, it is still a solid Mario Kart experience that I believe is better than Mario Kart 7 and potentially Mario Kart Wii. Hopefully there will be updates adding  DLC therefore emedying the character roster, adding new tracks and also an update which fixes some online problems and adds a way to view your coin total.

*all screenshots taken from my actual gameplay on my miiverse account*