Why I love…Timesplitters Future Perfect 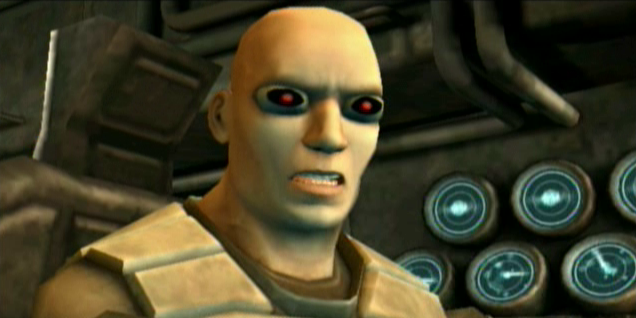 There is a reason why people cry out for Crytek (good choice of words) to make a new Timesplitters game, or a remake or a HD collection. It’s because Timesplitters was awesome, when I got round to play it on the original Xbox it was way into the next generation, and so a lot of the games didn’t really grab my attention, but Timesplitters did and I wasn’t expecting it to, hence my save file on it just being called “V”. Read on to find out why I love Timesplitters Future Perfect.

The basic concept around Timesplitters is time travel, as the game first takes part in 1924 (excluding the first “level” for story reasons) and ends in the future. That’s quite a big portion of different times that you encounter in the game, not to mention a whole host of characters which can be unlocked for the multiplayer mode, which I’l get into shortly. The level that really stood out to me was 2243, which if you haven’t played it involves a massive war with humans against machines which you find yourself right in the middle of, and to me that just felt epic.

I couldn’t find a picture of 2243 so enjoy this trailer!

The characters are insanely crazy and funny, for example seeing Cortez talk to the future version of him or the past version is quite a weird situation for him which I think he handles perfectly. The Arcade mode and Multiplayer modes give you hours upon hours of extra gameplay after beating the game, and gives you a motive to beat the levels on harder difficulty or faster than you previously did to unlock new characters for these modes. The Mapmaker in the game is also surprisingly fleshed allowing you to choose little tweaks such as lighting colour and flickering to keys for doors or how enemies behave. (actually thinking about it makes me want to go make a map)

Timesplitters is also quite weird in its selection of characters as you can even play as enemy characters, ninja monkeys, a dinosaur and even a gingerbread man.

Another one of my favourites were the levels that were set in a Haunted mansions full of zombies and ghosts, one of which was called Mansion of Madness, in which you team up with Jo-Beth Casey, a young girl wearing a shirt that says slut…

Anyway I found this mission quite eery and the boss was pretty awesome to fight, although not as eery as I found Half Life 2’s Ravenholm level. The level also featured an area which you could customize your own zombie which was pretty funny, the main part of the level that created this atmosphere was the listening to the scientists sulk and complain about how their experiments have gone wrong and how they are all doomed.

There is just so much to do in Timesplitters, and that’s without me being able to do any online play or map sharing, and it’s easily my favourite game on the original Xbox (it’s also available for Gamecube and PS2). There’s even cat racing if your into that, and weird arcade missions that you have to break as many plates as possible in a shop. I recommend this game not just to a select audience but to everyone, theres just so much to do that I urge you to play it and sign for the petition for a Timesplitters remake or Sequel if the petitions still exist.

Hey I'm Tom and I'm 24 years old and from the United Kingdom. I currently work as a software developer and I'm also Games Computing graduate, and have a heavy interest in becoming a games developer or a games reviewer. So far I have developed several game prototypes and a one button game for an assessment. I've also published a game on Android called RunTapper and also one called color dome. View all posts by TomInbound