I decided to take part in a Game Jam for the first time in a while. This was my first solo Game Jam, in which I roughly spent a couple of days on. The personal gains for this Game Jam were to motivate me to create a game for the first time in a while by forcing myself to stick to a theme and see it through to the end. Devil’s Diner is a memory game about ordering food.

The theme for the Game Jam was ‘Bad Cooking’. I decided to think about the word ‘Bad’ in several different ways. The first thought was for the food to taste bad so I designed an idea around making food that people hate, for example by using gross items in the process. This soon began to seem like a re-skin of an ordinary food ordering game. Due to this I decided that it should work based on personal customer preferences. Customers would tell you what they like and dislike and you would be scored on how disgusting your food was to that individual person. 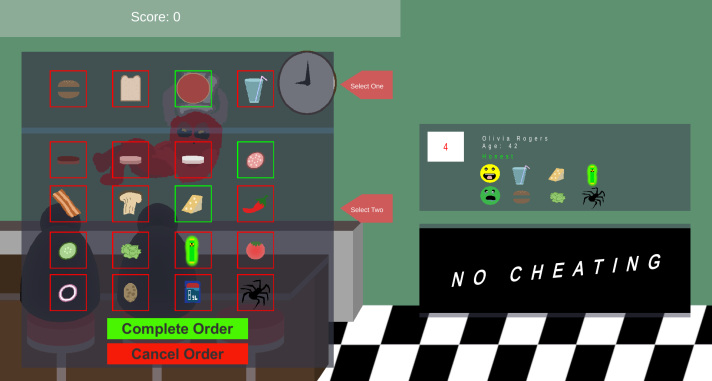 I then wanted to link this to a setting that made sense. I thought about having the Diner be set in Hell and using the devil because it would make sense by having the food be someones personal Hell (as it’s based on the individual). Following this I began to think of the motive, even if people were forced to turn up to eat food why would they tell the truth about what they hate if they knew they were going to receive what they hate the most. This led to the concept of personality factoring into the order system, if a customer is a liar the likes and dislikes are flipped. 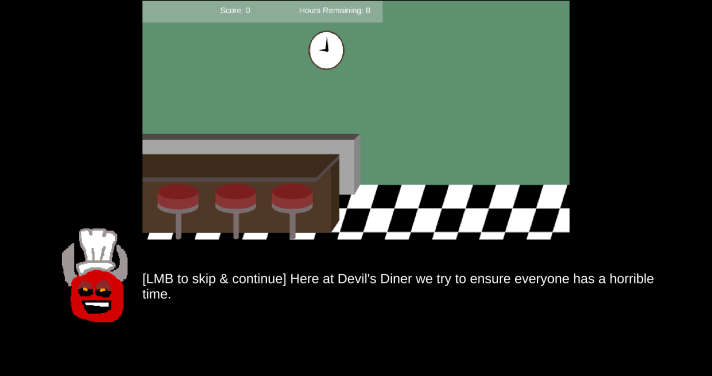 Late into the development I added a level system to get progressively harder by personality and number of items to an order, added a star ranking system and began to develop the devil character and give him some personality. I did this through the chat system you can see above.

Overall this game managed to get me out of my comfort zone of making platformers and into a genre I hadn’t tackled before, it also gave me a newfound motivation to do future Game Jam’s on my own if necessary to develop my skills further.